Another look at our living spaces 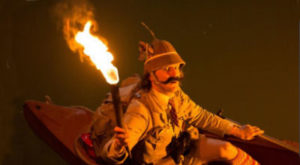 A show to follow in order to discover your town differently.

The very dangerous journey of two very very lost British Explorers. A wild journey in the heart of public places among impassable groves, bus shelters, poles, benches and other precipices. 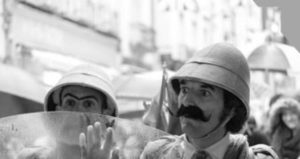 Tony Noyers has made his first show for the street after more than 1000 performances in 15 different countries with « Jo Bithume » and « Démons et Merveilles » Companies.

« We had no other choice than moving forward, behind us our paths were sinking one by one ».

Our two explorers would have liked to explore virgin spaces but there were no more. They have no more spaces to discover, they are lost. They are lost because they don’t have any reasons to exist any longer, they may only be two now, they are trying to survive as an endangered species.

The Very Lost adventure is a story of survival, in order to live… but above all, to exist.

Their job connect them to magnificent places, to the enigmatic, indomitable and moving nature, to the spirit of conquest and discovery. They are explorers. They are not in the right place at the right time, they had come to do their job. They do it and try to survive: to exist, to make their reason to live exist. So as not to disappear as the unknown lands, the mystery and the infinite have disappeared. They move forward, they move forward not to sink, so as not to get caught up by their uselessness, their illegitimacy. The unknown spaces are not to imagine any longer. Our imagination melts like the ice of the poles that one day they must have discovered. So behind them everything collapses like bridges of snow, leaving spaces for unfathomable faults. Everything is disappearing and maybe with them soon. 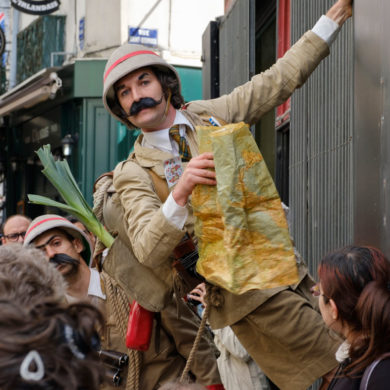 Our choice : To the conquest of the daily poetic space!

Taking a different look at our living space

Play the street, with the street, for the street:
The setting, the context of our story is the street and what is happening there.

Poetic diversion of the reality:

Bring the idea of landscape into public spaces to make the extraordinary come out in the ordinary.

Put the city and the wilderness side by side:
Public spaces and wild spaces conflict. It is the notion of danger for the last one and the notion of secured spaces for the other one.

Helping the viewers to recall their jubilation to imagine!

Start from nothing:
They are only two, with no technical help or effects.
What is spectacular is that their incredible journeys are nothing else than their jubilation to imagine.

Pictorial characters:
The characters, figures from picture books, give an impression of living pictures. As if they came out of an old postcard or from an old adventure movie.

The scope: the adventure at ground level

“We are filled by the need of confronting ourselves to this infinite, to the vastness of the world, to the power of the elements, because it seems to us that it is there that we can meet who we are” Pierre Bouthors

Surviving our own flaws

In a situation of survival, human relationships are under severe strain. They are roped to each other because they would get lost even more on their own. But here’s the thing, it is sometimes complicated, sometimes impossible and often dangerous to be two. Being together, they risk their lives… but being alone they risk it too. 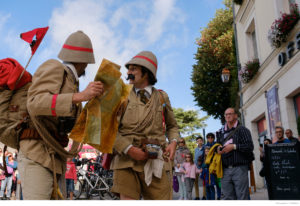 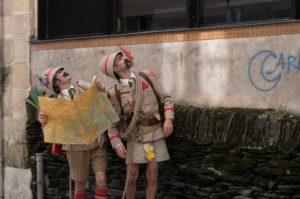 Finally, these flaws in which they try not to sink are simply theirs. And that may be what they simply have to discover.

I don’t want anything else than our Human height, some props, our imagination and our spectators’ imagination because what I find spectacular above all is the strength that Man can draw from his ability to wonder.

The press : what do they say about it?

Street furniture is far more dangerous to move through than the deepest jungles. The two explorers of Very Lost demonstrate it brilliantly. Coming out of a 19th century adventure picture book, they surprise the spectators who are glad to witness this improbable journey.

Raising our heads, we could see, between two Christmas cabins, two explorers obviously lost on the roofs of the Christmas Market on Travot Square! These two men seemed to be perched which made the grown-ups laugh and the little ones gawk.

A big personal crush at the Paléo Festival for a show which has just came out: Very Lost by “Les établissements Lafaille” company.

It is a moving street show with a very funny clown duo who improvise while walking the streets. Some parts of the show are hilarious, I’ve seen them doing magnificent circles, it’s brand new and it’s great! I highly recommend it! 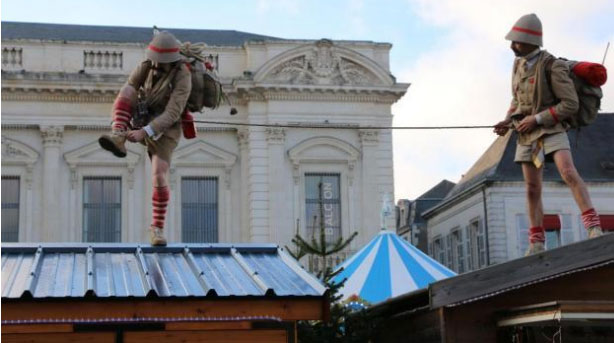 Technical data sheet : how does it work?

Use of street elements :

– we need an escort for the smooth functioning of the show
– No musical balance or noise pollution on the tour or around the tour.